Since there’s often a waiting list for such commodities as pasture-raised pork, I went ahead and contacted Liz, our meat farmer, about a whole hog. And what do you know? October is a great time to get a pig. Despite my deep abiding affection for the Little House on the Prairie books, I know next to nothing about what time of year hogs are ready to harvest. Ma and Pa did their hog butchering after the snow was deep, so I guess I was figuring that here in the temperate zones, we at least were supposed to wait for the rains. But no, my pig is just standing around in the yellow-dusty pasture waiting for his fate to meet him. 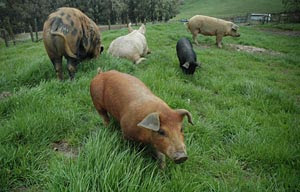 Along with the “good news” that I’ll need to send a big chunk of change sooner than I thought, Liz asked me two important questions: skinned or scalded? And even more daunting: do I want the offal? Well, heck, I don’t know. Scalding sounds somehow cleaner, until you find out that scalding is what you do when you want to take home the head, skin and lard, none of which seems like something I need in my freezer. So, skinned then. But do I want the offal: the heart, liver, kidneys & who knows what else? Well, honestly, no, I do not. But it seems like a waste to have it thrown away when the nations top chefs are all finding novel ways to serve organ meats. So, okay, we’ll take it and do our best. Worst case the dogs get it, right?
Posted by Kenna Lee at 2:39 PM No comments: 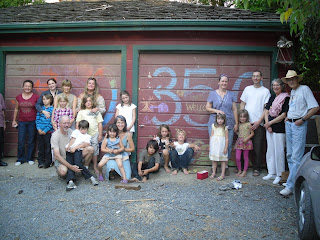 How do you combine a kid who wants to put on a show and a mom who wants to constantly harp on saving the earth? Put on a show as a 10/10 Global Work Day event! It's so hard to help the kids feel empowered to make a real difference, but seeing their picture in the slideshow on 350.org was a big thrill. I think it's one of the few times I've felt as if all this internet "connectivity" made us feel really connected to something real and important. Plus, it was a bonafide success, in that my neighbor came, and said that he didn't know what the significance of the 350 movement was, but now he could tell his friends. Each one teach one, even if it means you give a party and have to endure the torture of freaking out that too many people will come and you won't have enough food, and then the last minute panic that no one at all will come and you will be forever marked in the eyes of your children as a failure and a social outcast...
Posted by Kenna Lee at 9:55 AM No comments:

“Our cow,” as we affectionately call the butcher-paper wrapped parcels in the deep freeze, is nearing the end of its useful life. Its breathing-eating-shitting life ended a while back, when a man called The Harvester arrived in the bucolic rolling hills where this beast reputedly lived a fully realized bovine life. The Harvester proceeded to “harvest” the animal, and deliver it in large chunks to our local butcher, who carved it into smaller chunks and gave it to me to cook for my growing, insatiably hungry kids.

Having spent a crucial period of my young adult life as a vegetarian, I’m a little behind the curve when it comes to the heating to essential temperatures and serving of meats, preferring to rely on precooked sausages for a great deal of our animal protein intake. But the hip eco-eaters are all getting their own deep freezes filled with happily harvested meats, and I’ve got to keep up with the Van Joneses if I want to ever claim the elusive title of eco-mom. So I picked up the little flyers on cooking grass-fed meat and sent a big check to the farmer. (The self-same farmer from whom I bought my fabled twenty-dollar chicken. See June, 2009.)

After I picked up the cow in the minivan and packed it into my freezer, I went on a culinary stampede of the simpler beef dishes: burgers, meatloaf, pot roast. These were universally popular, especially the meatloaf which I made from an old Joy of Cooking recipe which might more aptly be titled Fatloaf, seeing as it contains both ground up bacon and a significant dose of heavy cream. But once the roasts and ground beef were gone, I was out of my league. Somehow, despite having grown up with a constant supply of beef from our own cows, my youthful foray into vegetarianism has left me not having the slightest notion how to cook a steak. My kitchen shelf is packed with vegetarian cookbooks, and when you browse the internet looking for instructions, all the recipes involve a grill, which I don’t have. So I did my best, and the innately carnivorous Mr. Mixed Media ate it no matter what, but The (more discerning) Percussionist quickly began saying, “Steak? Yuck. I don’t like cow.”

This all came to a head last week, when I pulled out two parcels labeled “short ribs.” Well, I thought, people barbeque ribs, so as they thawed I bought a bottle of barbeque sauce and told the excited kiddos we’d have barbequed ribs that night. (I thought I could pull it off on my cast iron stovetop faux-grill.) When I unwrapped the packages, the contents didn’t look like what I was expecting, but I gamely chopped apart the chunks of bone and slathered the pieces in the sauce. I had a huge pile of these cooking just in time to feed my son’s friend before we took him over to his soccer game, but when I placed a couple of the better-looking ones on his plate, he politely began dissecting them without ever touching his mouth with the meat. Then I served up Mr. Mixed Media, who gnawed away with delight, and then The Percussionist, who, more intimate with the cook, picked one up and declared it “disgusting,” to my great disapproval. Bright Eyes hadn’t yet flitted toward the table, so I served a plate for myself and sat down. As I picked past the huge chunk of fat attached to my bone, I bit into a frankly repulsive piece of meat. I immediately apologized to The Percussionist and snatched away the plate from his friend, throwing the scraps to the eager dogs.

We had quesadillas. And Mr. Mixed Media asked for some of the ribs in his lunch the next day, the dear. The dogs have been in heaven all week. Sometimes the learning curve is steep. But I have learned this: (almost) everyone prefers pork. So I’ll look into getting a pig. After all, I’m a single mom now, so I have to bring home the bacon. I just have to work through the remaining mysterious parcels of the cow first. Oh, and maybe buy a carnivore’s cookbook. I’m sure the pig will have some mysterious parcels of its own.
Posted by Kenna Lee at 2:11 PM 1 comment: