Never back down. But maybe retreat? 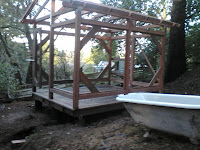 The FSC-certified hand-built bathhouse out in the woods is almost complete, which means that my eco-studio can almost (always few tiny details undone) be rented out as a writing retreat.  No phone, no internet, nothing but peace and quiet and a radiant-heat floor under the redwoods. 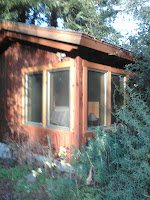 I’ve thought about offering it as an activist retreat as well, maybe for cheap or free to earth activists who need some time to rejuvenate.  But seriously, have you ever heard of an activist going offline for a few days?  Could Bill McKibben survive without his internet line to the rest of us footsoldiers of the environment, waiting to hear our next marching orders? (Bill, you are welcome any time.)


Hm, I wonder.  So if anyone knows a full-time environmental activist who could use a break, send them my way.  Occupy the woods.
Posted by Kenna Lee at 2:04 PM No comments:

Stopping. Okay, not stopping, but...

...can we at least sit down for a moment to enjoy a cup of tea?  Please?

This was a big week.  After all the arrests and teach-ins and protests, Obama said a big, fat, loud "NO" to the climate-killing Keystone XL pipeline.  Wahoo!  Hurrah!  And all that.

I mean, I'm as thrilled as anyone.  Or perhaps, "relieved" is better than "thrilled."  Relieved for just one moment that there is an ounce of sanity in the government, even if you have to dig hard to find it.  But I'm not relieved like, oh, great, that's over so I can move on to other stuff.  I mean, I'm perfectly aware that Big Oil will keep trying to strip-mine our political process in pursuit of profit.

Still, the "We won, but..." emails are making me a little crazy.  So I'm going to drink in the "we won" for now, and save the "but" for next week, after I've celebrated a bit.  After all, my kids have been going through this protest movement with me, and I think I want them to believe for just a few days that the good guys can win, at least for a while. 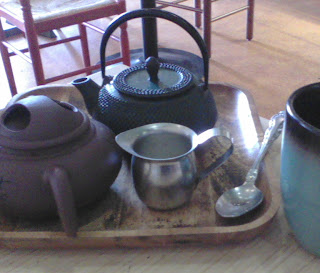