I just knew that someone had called the cops.  Somewhere in my cracking pelvic bones, I knew.  At the time I was a bit busy, so I would not have this knowledge confirmed for several days, but in those screaming hours, I knew.  And I had a Plan.

The cops were lucky they couldn’t find our house.  As we learned later through our small-town grapevine, the cops were called by our back-fence neighbors, who didn’t actually know our house number.  And our house is set way back behind another house and a lot of trees, so when the cops drove down our street, they couldn’t hear me, and they drove away.

Had they knocked, my plan (unknown to anyone but me) was to clamber out of the birthtub, and stark naked, wet, and dripping blood between my legs, throw the door open myself.   “GO AHEAD, TAKE ME IN!” I would bellow.  “I AM DAMN WELL DISTURBING THE PEACE.  BECAUSE MY PELVIS IS EXPLODING.  YOU GOT A LAW ABOUT THAT?”

So yeah, probably best all round that they couldn’t find the house.  The neighbors settled for screaming “Shut the fuck UP!” across the fence, to which the midwife yelled back “She’s having a BABY!” And they left us alone after that, embarrassed by either my volume or their intrusion, hard to know which.

The other neighbors woke their middle-school-age daughter so she could hear the goings-on.   So, they said, she would appreciate the agonies of childbirth and the sins of Eve.  Or something like that.  Honestly, even though we all spoke English, we didn’t speak the same language as those neighbors at all.

And the thing is, you’d probably think, from all this, that we live close to our neighbors.  Um… not so much.  But if you scream loud enough, often enough, people tend to notice, even from way down the hill.

I always thought I’d rock by the fire, quietly, for several hours, then grunt and groan and growl a bit, and then cry tears of joy to meet my baby.  Ha!  It was more like 36 hours of whining, followed by 12 hours of out and out screaming, followed by the midwife trying to get me to “look at your baby” while I was busy hyperventilating and bleeding.  My slow-coming son, he sure didn’t prepare me for motherhood by shoring up my self-esteem about what a calm and competent mother I am.

Instead, he gave me a voice I never knew I had.

I had literally never, ever made that much noise, nor known myself capable of it.  I more tended toward the nightmare where you try to scream but nothing comes out.  Well, something came out this time.  And it’s not like I really thought I needed to know that I have a screaming banshee somewhere in there, but you don’t always get to pick which lessons life wants to teach you.

So I have a voice, shrill, disturbing, and loud.  And as time passes, and my motherhood matures, I keep trying to learn more about how to use it.  More often than I’d like to admit, it comes out directed at the aforementioned slow-coming son and his siblings.  “WHAT were you thinking???  HOW MANY TIMES do I have to tell you that wanton destruction of useful items is NOT OKAY???!!!”

But in the larger picture, I’m learning to direct it, to allow my sometimes loud voice into the world in ways that I think can change things for the better.  I wrote a book about trying to preserve our hope as parents during a climate crisis.  Seriously, I did, despite never having published a word until after I gave birth. 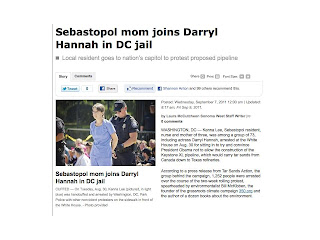 And my mothering has pushed me to start trying to make my small, loud voice be heard in larger arenas as well, such as in the Keystone XL debacle.  And that time, the cops did find me, which was, in fact, the point.

So, thanks, baby-boy-turned-big-boy, for helping me find that voice.  (I just hope to god I never, ever, have to relive that exploding-pelvis sensation.)  Roar on, loud mamas.  Let’s get the cops over here.

Visit Code Name: Mama and Hobo Mama to find out how you can participate in the next Carnival of Natural Parenting!

Please take time to read the submissions by the other carnival participants:

(This list will be live and updated by afternoon June 12 with all the carnival links.)